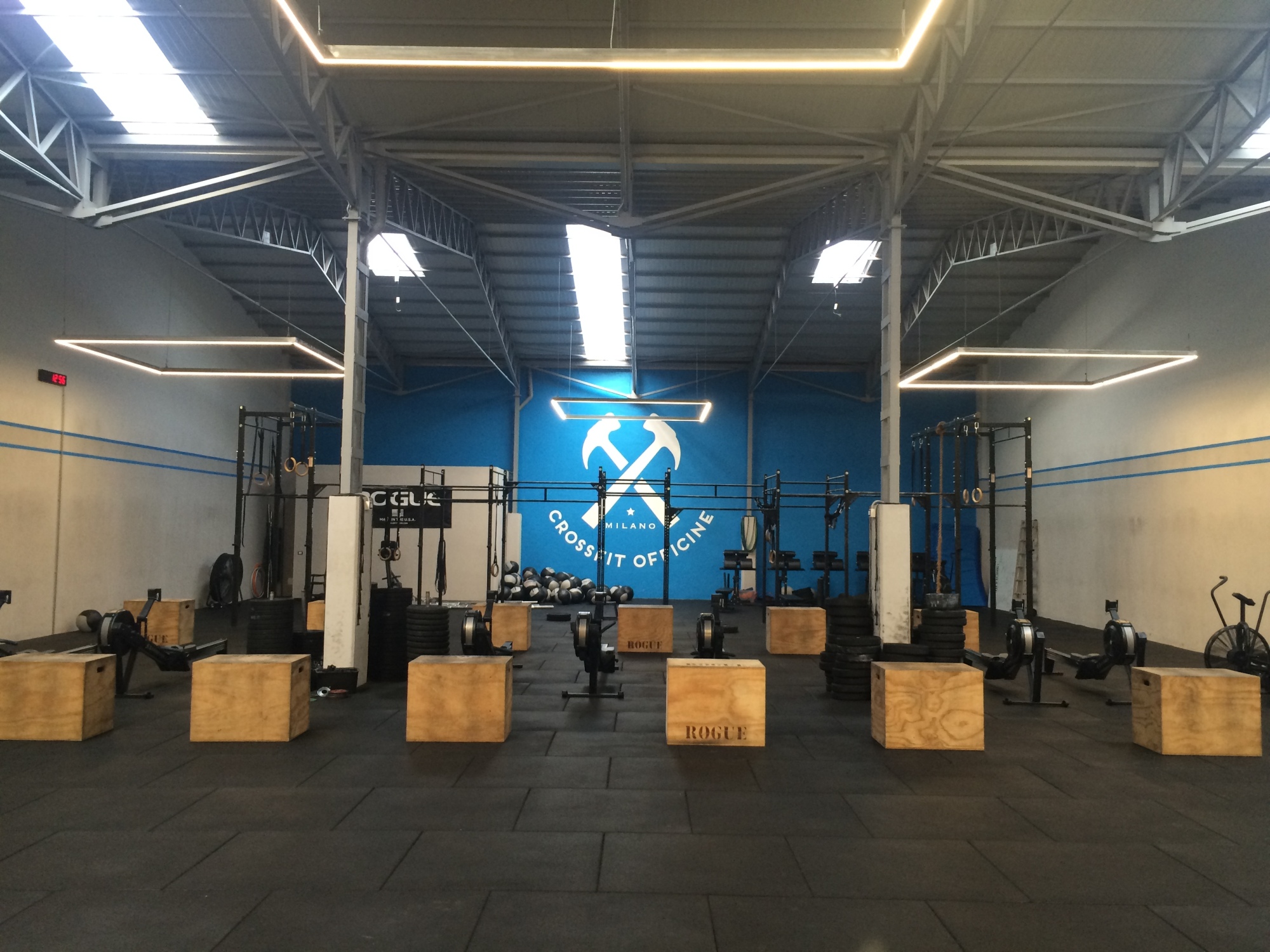 Talking with Sasha, Gianluca and Palmiro (my closest friends in Italy and owners of CrossFit Darsena) and listening to their story about how they became friends, started doing CrossFit and decided to open their own box, I saw there was a common point of reference. They all started from Reebok CrossFit Officine, which seems to be the first CF home to many box owners in Milan and some of the best athletes in Italy. It went without saying that I had to visit them at least once. 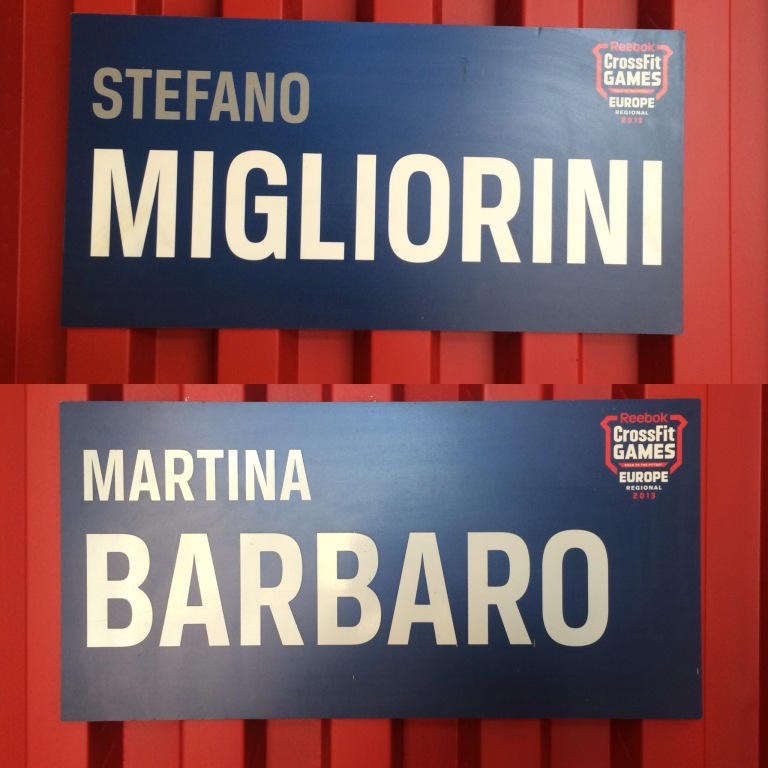 So, yesterday, I had arranged to meet with Gabriele (my landlord/CF coach/heavenly cheesecake maker) during his lunch break and train together at CF Officine. I have to admit I love the lunch break WoD habit here in Milano. It would seem the Italians take an hour off around noon to get their training done, grab a bite and go back to work. I guess the fact that most of them ride vespas or scooters (btw there’s apparently a huge difference among the two!) makes it easier to commute and makes lunch-break wods possible. First time I saw men yesterday coming out of the box after a wod being so dressed up, suit, tie, perfume and all… As if they hadn’t dropped a single drop of sweat just 15’ ago!

I am getting carried away again 🙂

We were on for the 13.00 wod and I barely made it on time due to a general strike, which meant that there were no trains and I had to go from one part of the town to the other by bus & tram. A good hour to get there, but at least I saw some new parts of the city.

I met Pete, the owner of the box (Nolan, he does look like Popeye! Hehe) who was kind enough to give me a ‘journalist’ discount (instead of the standard 20 Euro drop-in fee I paid 12 Euro). The perks of being a ‘blogger’! 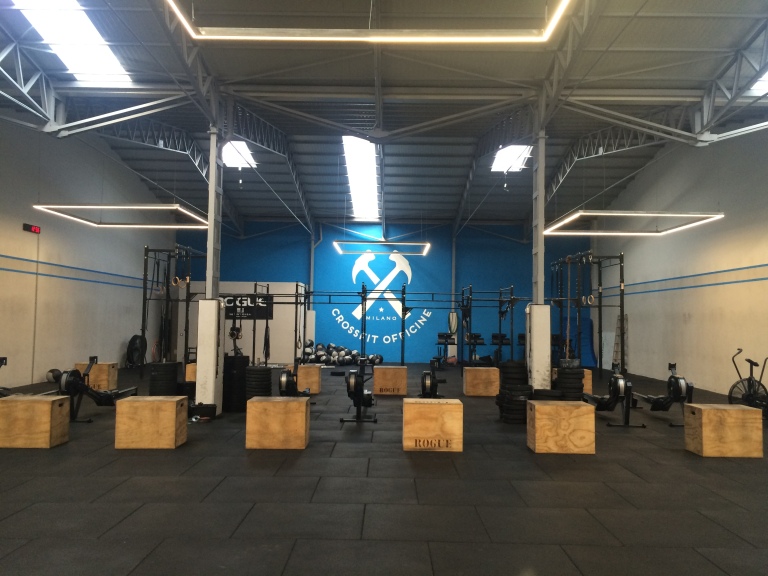 Reebok CrossFit Officine was a nice box to workout at. For a moment there it felt like being at UnScared again. The class starts at 13.00 SHARP! No fooling around when the clock starts ticking! 🙂

The box was spacious and clean, all equipment in place and in a very CrossFitty industrial-like location with ample space to run outside too. I must say I wasn’t blown away by the warmth of their community though. Didn’t get to know any people there. Probably everyone was rushing back to work and it was lunch-time for the coaches and owners as well. I was very thankful I didn’t just drop-in on my own but was with Gabriele who also introduced me to his friend Luca and so I didn’t feel all alone. To be fair, I do realize that I may be expecting too much for being just a drop-in, and that in some boxes it takes more time to get to know people and come closer. I also do believe that boxes that get a lot of attention, tourists and drop-ins every day cannot afford to spend 10’ with each and every person dropping in for a workout. Not to mention that I do understand there is a language barrier too, that can only make things harder.

Still, that said, I have to admit that so far in Italy, my heart belongs to CrossFit Darsena. Yes, the same language barriers apply, yet in CF Darsena they let their smiles and body language do the talking! They laugh and joke and embrace the newbies, and breaking the ice is a matter of a few minutes. On my first day in CF Darsena I was introduced by the coach, not because I am a ‘famous blogger’ (I can only make fun of myself for considering to be a blogger in the first place), but because I was new in the group (well, maybe also because I would be staying with them for some days, which turned out to be a month and a half!). This is also the way I remember things in UnScared CrossFit. Drop-ins are introduced to the team, people say ‘Hi!’, high five you after the wod and tend to get interested in finding out what brought you to their box, what’s your story etc. and that is how you make friends, that is what community is all about.

In any case, the highlight of my day was the post-workout lunch with Gabriele, Luca and Simone at a place I would’ve never thought of going into and which apparently had one of the best burgers in town – now confirmed as the best burger I’ve tasted in Milan hehe. It could only seat, like, 15 persons (squeeze 18 maybe on a good day) but the only thing I need to say is that when we got in there were 4 crossfitters there (from other boxes), taking their lunch breaks and enjoying one of those… 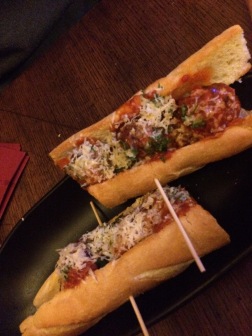 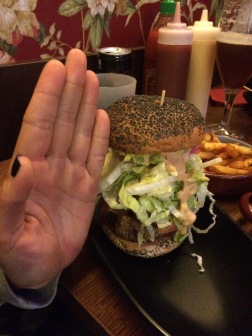 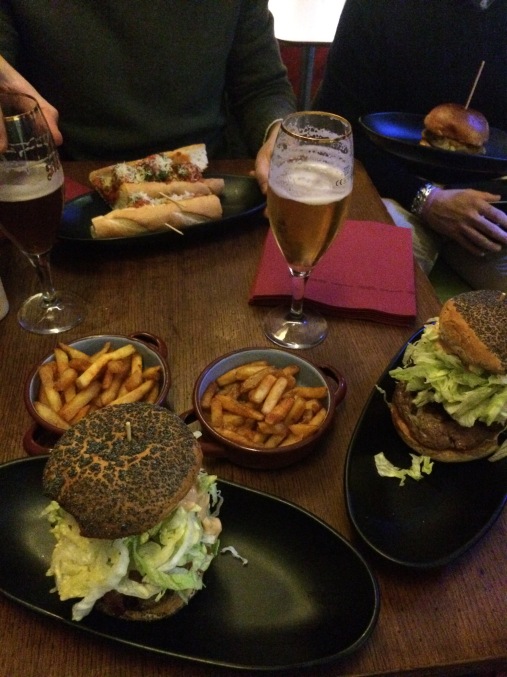 I am grateful for the guys taking a prolonged lunch-break and keeping me company, chatting away, having so much fun and delicious food! I heard about other boxes in the city that are also closer to my perception of ‘a cool box to train at’ and I am definitely visiting them too! I was also told that a box will be holding a New Year’s wod event between 22:00 and 23:00 on New Year’s Eve. Well, I guess that’s where 2016 will find me! Now need to find something to do on Christmas, 🙂

All in all, I the more I travel and meet new people  and train at new boxes I am convinced that you can perform the same workouts in almost all boxes around the world. You have barbells, kettlebells, weights and the rest. You have what is needed to make you sweat and get a stronger body, if you put the work into it. But. There’s so much more to a box than the equipment, the poshyness or the big name. It’s first and utmost the people that create the community. Yes, CrossFit is about becoming fit and the best YOU possible, but not only physically. It is also about being humble, approachable, helping and cheering on your mates, it’s about community, and, at the end of the day, it’s about having fun.

The more I travel and the more boxes I see and train at, the more I see that the fact of the matter is that people that train at a box are ‘educated’ by the owners/coaches of the box. You either like and adopt the box’s mentality or move on until one day you enter a box and are surrounded by like-minded people with whom you have fun. Then it just clicks. And when it clicks, you become a lifetime member, contract or no contract!