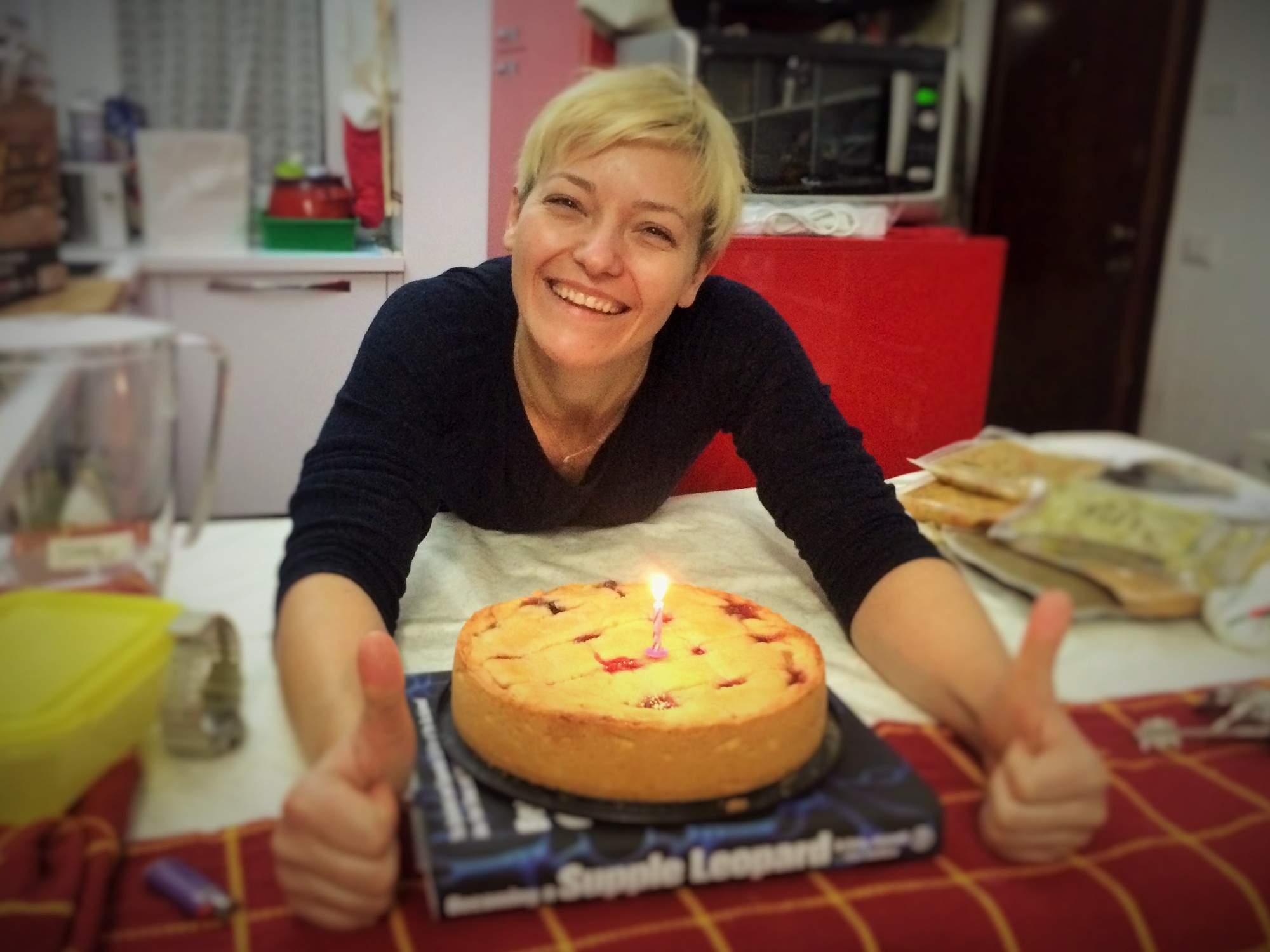 Just entered my 37th year on this Earth and this day starts with… Lambada! That’s the mood of the day and hopefully the mood for the rest of the year. Maybe it’s the thought of Brazil gradually becoming my new reality… maybe it’s the great day I had yesterday… maybe it’s the over-consumption of Prosecco and cake, or it could well be all of the above plus things that I cannot even identify at the moment.

Let me take you back to 1989 for a moment. I was 9 and living the heat of Lambada. It was lambada tops, lambada skirts, dancing to Lambada day in, day out! There was no Spotify, no YouTube, no internet to download music… I was at the mercy of MTV, hoping to see the Lambada video clip pop up as many times as possible and every time it would be played I would dream of being that little girl at the beach dancing with that cute little boy and, in an attempt to make my dream more ‘realistic and feasible’ I would dream that someone would dance with me to the Lambada tune at the next party, but you see, boys in my class were not quite the dancers (trying to not over-generalize by saying that men in Greece just don’t do dance, haha)!

Oh, I was such a party animal back then! I would start dancing when the first song was played at the party and would almost always be the last one to sit down when it was about time to go home. I actually have proof of that, but this is a top secret video I am not yet ready to share 😀

I would always come back home all sweaty and out of breath from having danced throughout the whole party. Back then, at age 9, partying meant gathering at around 3-4pm and by 8-9pm we would all be home, but those 4-5 hours of dancing was all I was looking forward to!

The years went by, the music scene changed, my music preferences too… But last night in the car freezing back home from a lovely birthday dinner we started talking about Brazil, the warm sun, the beaches and sea, the cheerful people and the hot bodies (hey, I am only being honest here!) and… somehow, out of nowhere, this tune came to mind and it was so easy to play it on Spotify, hehe. BOOM all the memories came back! I just needed to watch the video clip, fly back in time for a moment… and this is exactly what I did. I am back to dreaming of being that girl serving the beach bar (a more realistic dream at this age), and – why not – dare to dance again. Hopefully, with some guidance, a little ‘lambada’ skirt and loads of good will (or mojitos – can do the job equally well) I will be on the dance floor dancing the days away!

Back to the 0 degrees and my life in Milan. Back to my birthday weekend!

There’s this thing about my birthdays since Jan 2013 when I started CrossFit. Up until I was 33, being my first year doing CF, every year felt like I am getting one year older, not wiser, not more experienced, not stronger, not happier. Just older. Believe me, that is not a good feeling to have on your birthday!

But after one year of practicing CrossFit (when I was merely going 2-3 times/week with some gaps of a month of doing nothing in between) something ‘magical’ happened. I was no longer feeling one year older! I was faster, stronger, fitter (CrossFit FSF – this came out naturally!). I was a better me, I liked me more! It was FUN to be me! This was only the start, but what a start indeed. There were certainly times I thought of quitting, times I thought ‘I am not made for this’; times when it seemed that everyone else was progressing when I was still struggling to get a single T2B. But I didn’t quit. And look where it got me. Too distracted again… Gee, I need to start controlling m y writing urge J

So, for my birthday, also being my last weekend in Milano, I wanted to spend my days doing what I love the most with the people I have come close to the most in the past two months.

Saturdays are simply AMAZING at CrossFit Darsena! Everyone’s there, there’s always a team wod planned and the atmosphere in the box is so hyper, it’s the best way to start your weekend. Loud music, laughs, screams (good ones), teasing each-other, playing football in the box, chilling with the peeps… What a beautiful home to the CrossFit mentality!

This Saturday we worked on our push presses and snatches, thankfully as I sprung both my ankles last week (yes, it’s a skill to be able to do that, I know). I didn’t know there was this tradition, but the lucky fellas that were training on Saturday had to warm up doing 36 burpees as a special gift to me for my birthday. It was the only moment during my day that I wished I were younger!! Lol 😀 Sorry guys!

Federica and Caterina were my teamies and we nailed the wod, finishing last but with our heads up! What can be more inspiring than seeing people push through, ignore their fears and give it their all? A Saturday wod at CrossFit Darsena is a must for whoever visits the city, really. Suffice to say that although there are only two classes on this day, almost all regular members show up to train together. Priceless!

In the afternoon, we’d planned to meet with L&L (Luigi and Licia from CrossFit Lambrate) and drive up to CrossFit Lugano to hang out with Rollo and his gang of CrossFit junkies. It lately comes out so naturally to just say “yes, I spent Saturday night at the box with my friends” or “we had dinner at Gabri and Vale’s house the other night and had such a great time… Good food, CrossFit small talk, CrossFit videos..” hehe, the definition of a CrossFitter always respecting rule #1! 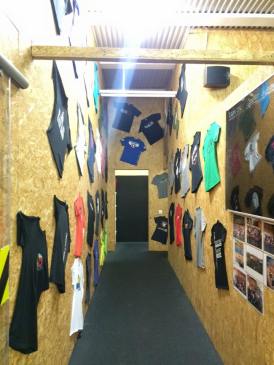 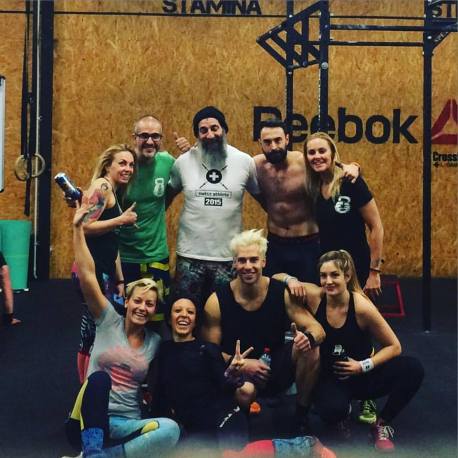 So, it’s no wonder I spent my birthday at 3 boxes and loved every minute of it!

CrossFit Lugano has several hidden treasures, some of which I am allowed to reveal, but not all, sorry! For one, there’s a back door to a strength room! You know, when you feel like working on some machines, but would rather do it at the comfort of your privacy… Yeap, you can have that at CF Lugano! Also, what is this Chevy engine doing here?

…and Rollo, you just have to love that guy! I first contacted him when I was planning to come to Italy and asked for his help to join the media team at the Fall Series competition in Cermenate, then fate had it that we spent New Years Eve together at CF Lambrate and now we were visiting his box to train on my birthday. He is so laid back, easy to hang out with and keen to help with everything. I think I will be using that couch of yours, Rollo, next time I’m in Europe 😉

And time flied, and we were back in Milano, with our only plan being to enjoy some nice Prosecco at home and chill out after a long day. But first, Licia asked me to take the dogs out with her, which was a tough task given the freezing temperatures and tiredness, but what could I say? It was the least I could do, right? I even felt bad for thinking of it as a chore, but little did I know it was all part of a plan!! After spending around 15′ in the cold waiting for Ercole to do his thing, I was so happy to come back up to the flat and was even contemplating switching from Prosecco to a hot cup of tea and my pjs, i.e. I was entering a zen mood… when out of nowhere Gabriele and Valentina (my landlords) jumped out from behind the kitchen table screaming “S U R P R I I I I S E” holding a birthday cake and giving me their biggest smiles! I stood there for a minute in complete shock not believing what had just happened! 🙂 I mean, I didn’t even know what to wish for when blowing the candle! A 50k snatch was the first thing that came to mind, but Gabri brought me back to my senses, so my birthday wish was much more meaningful and unique – I made me a very nice wish this time, and I really hope it comes true!

This was only the start to our evening as it turned out that a whole evening was being arranged behind my back! More plans! What I expected to be a nice sofa-night with absolutely passive recovery ended up being an evening full of laughter, life stories, jokes, unlimited sushi, unlimited Prosecco and unlimited, home-made, amazingly delicious cake straight from Valentina’s kitchen, made together with her 3yo niece.

I was inhaling love from people I only met a few weeks ago and who had no reason to go the extra mile to arrange all this for me on my birthday. But they did, and I am so grateful!

What more would you need to be happy on your birthday? A pair of Havaianas? Got those too! I’m telling you, these guys are unbelievable 🙂

I also got a jar of a type of marmelade called Chyawanprash, and Indian mix of superfood and spices supposed to prevent ageing (great for a birthday present, right?!). This will have to wait to be opened in Brazil as I am afraid that, if I open it, I may not be able to take it on board the plane. Valentina gave me a heads up though “It’s one of those foods you eat because they are good for you, not because they are delicious” she said. Hm, I guess it’s not like peanut-butter then, hehe. 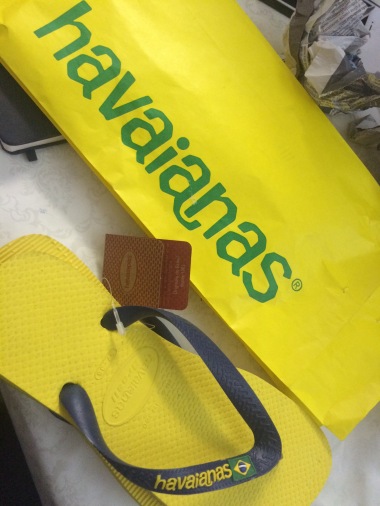 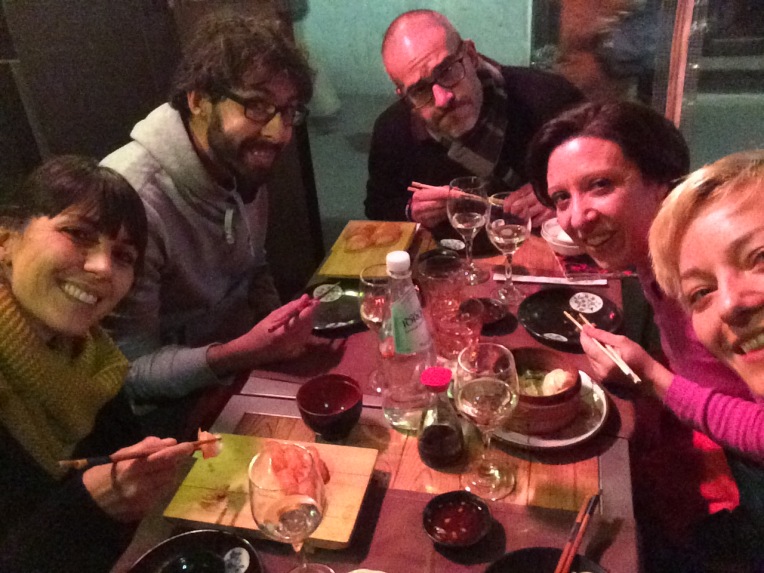 It all came so naturally, at least to me. I mean, I had no big plans or expectations, just to spend my day working out with friends and having fun at the boxes, playing with kettlebels and jump ropes and barbels. Yes, I had to admit the Prosecco was in the picture all along. But it turned out that my day and night was full of love, joy and sheer happiness and the people around me went out of their way to make all this happen!

It is exactly this feeling of deep contentment that I had not felt in a long time. The one that comes from within.

So, here’s to the new me, inside and out! The new me getting ready for Brazil with my new haircut and hairdo tomorrow (my very well-thought of birthday gift from Sasha, the most stylish and girlish of my Italian CrossFit friends) but also the stronger and happier me – hopefully, the me that also has a 50k snatch by 16 January 2017, Cheers!